**** SPT Training does not offer therapy or counselling.

Why training is important:

Every seventeen minutes, someone in the United States commits suicide.
Each day approximately 86 Americans commit suicide, and 1,500 people attempt suicide.
Suicide is the nation’s 10th leading cause of death.
For those 15-24 years of age, suicide is the third leading cause of death.
More Americans, an estimated 31,000, kill themselves than are killed by homicide.
More than 8 million adults reported having serious suicidal thoughts in the past year, 2.5 million people reported making a suicide plan in the past year, and 1.1 million reported a suicide attempt in the past year.
Nearly 16 percent of students in grades 9 to 12 report having seriously considered suicide, and 7.8 percent report having attempted suicide once or more in the past 12 months.

Everyone can play a role in preventing suicide by being aware of the warning signs of suicidal behaviors:

Talking about wanting to die; feeling hopeless, trapped, or in unbearable pain; being a burden to others.
Looking for a way to kill oneself; Increasing the use of alcohol or drugs.
Acting anxious, agitated, or reckless.
Sleeping too little or too much Withdrawing or feeling isolated.
Showing rage or talking about seeking revenge; and Displaying extreme mood swings.
Extended depression, sadness or uncontrolled crying,Giving away personal or prized possessions.
Lack of interest in previously enjoyed activities, lack of interest in personal appearance Withdrawal from friends.
Lack of energy or ambition, Restlessness or hyperactivity Increased risky behaviors.
Hopelessness and helplessness

Ask them if they are thinking about killing themselves. (This will not put the idea into their heads, or make it more likely that they will attempt suicide.).
Call the U.S. National Suicide Prevention Lifeline at 800-273-TALK (8255).
Take the person to an emergency room or seek help from a minister or medical/mental health professional.
Remove any objects that could be used in a suicide attempt; and If possible, do not leave the person alone.
Listen: Help a suicidal friend to talk about whatever is painful or distressing and offer them emotional support.
Express Your Concern: Encourage them to contact others who could be supportive.
Listen to what is said and treat it seriously.
Help Someone To Stay Safe: If they are in immediate danger, stay with them and call for urgent assistance.
Encourage The Person To Seek Help: You may want to offer to accompany them.

To show the presentation in your full screen, click on the icon to the right of the YouTube icon. This suicide prevention training is designed for ministers and clergy of all faiths. By watching this training, Ministers and Clergy will be better able to : Improve interview skills in evaluating suicide risk. Increase confidence in … 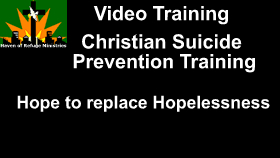 Christian suicide prevention training for Christians and Christian Ministers. Christians can overcome and be totally free from, bipolar, PTSD, suicidal thoughts, depression, anxiety, panic attacks, fear, and other oppression’s: These disorders have a spiritual base and if we can correct the spiritual problems, which we can, but only from the Word of God (the world …

Do Something to Help Yourself

Seek out a support group (starting with your church) that ministers to the area of difficulty in your life. Interacting with others who are facing similar challenges in their lives will help you feel less isolated. Force yourself to do something the next time you feel down. Inactivity only makes depression worse. Here are some …